Skip to main content
SUPERCONDUCTIVITY: From collective modes to quantum phase transitions
JavaScript is disabled for your browser. Some features of this site may not work without it.

<p>This workshop honored the contributions of *Allen Goldman* over a career spanning more than 40 years at the University of Minnesota. Invited speakers from around the world, including collaborators and former students, spoke on research that has been enriched over the years by Allen’s insight and creativity in the field of superconductivity.<p> Allen joined the School of Physics and Astronomy in 1965. In the 1970’s, his group discovered the existence of gapless order-parameter collective modes, now known as Carlson-Goldman modes, in superconducting films. Allen was one of the pioneers in the physics of two-dimensional systems, including the Kosterlitz-Thouless transition in superconducting thin films and networks. In the mid 1980’s, he and his group developed a new means for preparing extremely thin quench-condensed superconducting films, and Allen’s subsequent research has led to a profound understanding of the onset of superconductivity at zero temperature. His demonstration that the superconductor-insulator transition in thin films has universal properties has made it one of the canonical examples of a quantum phase transition. Allen has also advanced the materials physics of superconductivity by perfecting new techniques for the growth of high-temperature superconductors by molecular beam epitaxy.<p> This workshop was sponsored by the <a href="http://www.ftpi.umn.edu/index.html">Fine Theoretical Physics Institute</a> and the <a href="http://www.physics.umn.edu/research/cm/">Condensed Matter Group</a> in the <a href="http://www.physics.umn.edu/">School of Physics and Astronomy</a>, University of Minnesota.<p> Scientific Organizing Committee:<p> Paul Crowell (Univ. of Minnesota)<br> Alex Kamenev (Univ. of Minnesota)<br> Ying Liu (Penn State Univ.)<p> Other events associated with the workshop planned by an advisory committee of:<p> Ted Wang (PhD 1992)<br> Jinxiang Liu (PhD 1983)<br> JC Wan (PhD 1991)<br> Fang Yu (PhD 1992)<p> 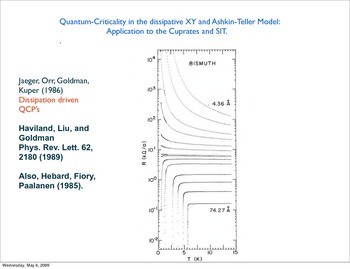 Quantum-Criticality in the dissipative XY and Ashkin-Teller Model: Application to the Cuprates and SIT.﻿ 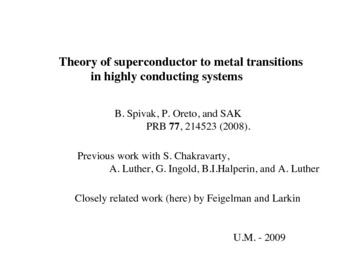 Theory of superconductor to metal transitions in highly conducting systems﻿ 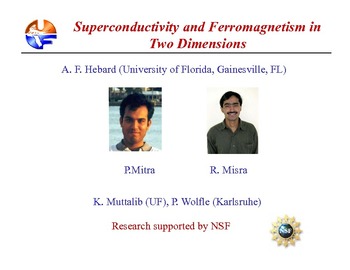 Superconductivity and Ferromagnetism in Two Dimensions﻿ 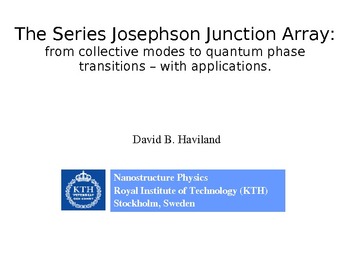 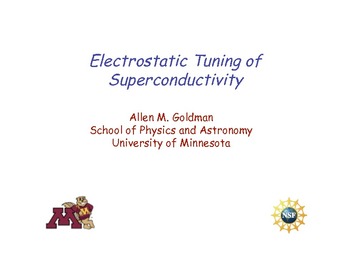