Skip to main content
CapX2020
JavaScript is disabled for your browser. Some features of this site may not work without it.

The electricity transmission grid in the United States is an extensive, interconnected network that delivers electricity from generators to consumers, and is a vital piece of American infrastructure. Addressing aging grids, issues of system reliability, and evolving state and federal energy policies requires a substantial upgrade to the current high-voltage transmission system. Large-scale transmission projects are critical for the development of new energy infrastructure, but are notoriously hard. Successful projects engage with a multitude of stakeholders to justify project need; ensure proper line design and placement; and account for environmental, economic, and social impacts of the project.

CapX2020 is an initiative involving eleven utilities in the Upper Midwest who collaborated together to invest $2.1 billion in over 800 miles of new high-voltage transmission infrastructure. In the early 2000s, the electricity transmission infrastructure of the Upper Midwest needed to be upgraded. The aging grid was struggling with reliability issues and having difficulty supporting growing electricity demands. At the same time, new renewable energy generators, predominantly wind, were connecting to the grid to meet state-level Renewable Portfolio Standards (now known as Renewable Energy Standards). The last new high-voltage transmission in the Upper Midwest was built in the late 1970s, and some of those additions had been fraught with controversy.

The CapX2020 group (short for “Capacity Expansion Needed by 2020”) was formed in 2004 to build the necessary high-voltage transmission lines. CapX2020 achieved success by building a strong coalition of 11 utilities that had the resources to finance and manage large-scale projects, and the political influence to ally with a broad range of stakeholders to change laws and influence regulations. The relationships the CapX2020 group cultivated coevolved with their work, allowing each utility to understand the challenge they faced of working together to build high-voltage transmission, work with each other to develop a process through technical studies and engagement with industry stakeholders, and make decisions about which rules of conduct were the most significant through governance and project agreements.

This collection contains 32 interviews conducted in the summer of 2015 and the winter of 2015-2016. Marta Monti performed all of the basic research, maintained project files, and conducted all of the interviews for this project. The purpose of conducting research interviews with stakeholders from the CapX2020 initiative was to explore the views, experiences, and motivations of individuals involved in the project. Employing qualitative methods of interviewing allowed for thick description and immersion in the context.

The interviews represent major viewpoints of the project including representatives from participating CapX2020 utilities, state and federal utility regulatory Commissioners, electrical industry representatives, wind developers, lawyers, environmental advocates, opposition groups, and landowners. The interviews varied with the nature of each interviewee's involvement in the project and reflect their perspective on project work. 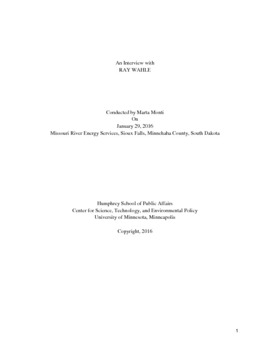 Thein, Mark; Monti, Marta (2015-07-31)
Mark Thein has been supervisor for the Oronoco Township for 18 years, and currently holds the title of Chairman of the Board. Mr. Thein is also President of Thein Well Rochester, Inc, a family business. 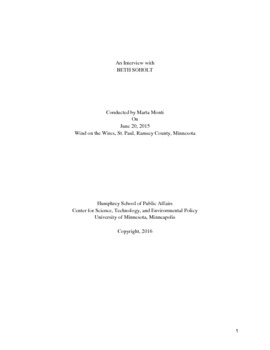 Soholt, Beth; Monti, Marta (2015-06-30)
Beth Soholt is the Executive Director of Wind on the Wires, an NGO that works to overcome barriers to delivering wind power to market in 10 Upper Midwest states. Ms. Soholt has more than 15 years’ experience working with ...

Wachtler, John; Segroves, Louise; Monti, Marta (2016-08-06)
John Watchler is currently the Energy Program Director at the Minnesota Department of Commerce. Prior to this position, Mr. Wachtler was the Vice President of Barr Engineering, which provides engineering and environmental ...

Schrenzel, Jamie; Monti, Marta (2015-07-10)
Jamie Schrenzel is a State Principal Energy Planner with the Minnesota Department of Natural Resources and worked on the environmental permitting of CapX2020 lines.